The Power of a Team 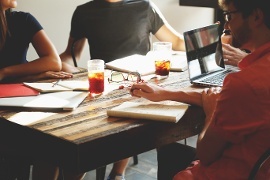 can you do with a team? Practically anything. With the right people you can overcome difficulties, change perspectives to discover new paths and maybe move the finish line a little closer. This is a story of what happens when you find your team, assemble and cross the finish line together. Okay, so this isn’t a typical business blog….

After realizing I could not compete in a race I had participated in for several years, my daughter and I decided to volunteer. We took on the role of Split-timers at the 1 mile and 2 mile markers. They said they needed people with outgoing personalities and lots of energy. We weren't sure if we were the right candidates but we volunteered anyway. (Sarcasm)

We were encouraged to recruit additional volunteers and were lucky to find other fabulous runners to join our Spirit Crusade. Everyone had a story of why they were not racing this year. During the race we high-fived, encouraged smiles and often provided words of encouragement.

While some runners shouted back their gratitude, some runners laughed with us about how hard it is to run a race after a night of “too many” and others gave us high-fives in fear of being chased down for that high-five. The little runners stopped to tell my 18-year old daughter how much they loved her red rain boots then showed off their new running shoes. And while we like to think we connected with several of the runners, none of them had our hearts quite like Betsy.

As Betsy approached the 1 mile mark you could tell she was giving it all she had and was second guessing her decision to do this race on this day. She thanked me and told me I had no idea how much it meant. In my heart I knew she meant it. I rooted for her as she came about the 2 mile mark across from my station. She was not the last but it was clearly a battle deep within.

On the walk back to the volunteer station my daughter pointed out "my girl" was just up ahead. I really wanted to finish the race with her so my daughter grabbed my stuff and I was off to catch Betsy! As I joined her I grabbed her hand and told her I was there to finish the race HOLDING her hand. Soon the rest of the Spirit Crusade joined. Yes, the team clearly assembled to Betsy’s right, to her left, in-front and behind her with a goal in sight.

We learned that Betsy had a dialysis treatment the day before and was in need of a kidney transplant. One of her sisters was with her with the biggest smile on her face and true admiration for her sister. Betsy told me she dedicated this race as a symbolic journey of where she was in her life. She said she prayed angels would carry her through to the end and then we appeared.

As we approached the finish line, the road crew had moved it off the road. One of the Spirit Crusaders raced ahead yelling to put the finish line back in place. They inched it over but clearly not enough to matter or capture Betsy’s race data as finishing the race. Soon other Spirit Crusaders joined in yelling at the crew and physically helping to move everything back in place. I looked at Betsy and squeezed her hand then said "Let's do this right and run!" and we did. We crossed the finish line with our hands in the air as people watching cheered.

I am incredibly moved when I see pictures from this race. Prior to this day I had never met our team of Spirit Crusaders or Betsy and her family. Just imagine the possibilities of a dedicated team! Achieving goals, overcoming obstacles and just maybe moving the finish line when it moves out-of-reach.

Contributed by our Team Member, Melissa