The client is pretty active. She likes to attend fitness classes - such as yoga and pilates - even while on business trips. As a result of this need, she was doing a lot of internet searching prior to each trip. She was spending time in each new city, doing research, in search of a local studio to practice.

END_OF_DOCUMENT_TOKEN_TO_BE_REPLACED

Use Trip It to Plan Out Business Trip Logistics

The client continuously needed business trips to be planned and executed with precision. This required syncing up his calendar with his flight times, his hotel information, and car rental details. It became a burden to consistently add these trips to his calendar, nearly weekly, ensuring nothing got missed.

END_OF_DOCUMENT_TOKEN_TO_BE_REPLACED 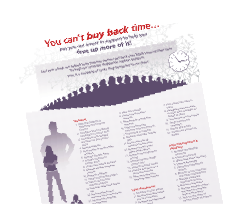